A virus is a small infectious agent that replicates only inside the living cells of an organism. Viruses can infect all types of life forms, from animals and plants to microorganisms, including bacteria and archaea. Since Dmitri Ivanovsky's 1892 article describing a non-bacterial pathogen infecting tobacco plants, and the discovery of the tobacco mosaic virus by Martinus Beijerinck in 1898, about 5,000 virus species have been described in detail, although there are millions of types. Viruses are found in almost every ecosystem on Earth and are the most numerous type of biological entity. The study of viruses is known as virology, a sub-speciality of microbiology. While not inside an infected cell or in the process of infecting a cell, viruses exist in the form of independent particles. These viral particles, also known as virions, consist of: (i) the genetic material made from either DNA or RNA, long molecules that carry genetic information; (ii) a protein coat, called the capsid, which surrounds and protects the genetic material; and in some cases (iii) an envelope of lipids that surrounds the protein coat. The shapes of these virus particles range from simple helical and icosahedral forms for some virus species to more complex structures for others. Most virus species have virions that are too small to be seen with an optical microscope. The average virion is about one one-hundredth the size of the average bacterium. The origins of viruses in the evolutionary history of life are unclear: some may have evolved from plasmids—pieces of DNA that can move between cells—while others may have evolved from bacteria. In evolution, viruses are an important means of horizontal gene transfer, which increases genetic diversity. Viruses are considered by some to be a life form, because they carry genetic material, reproduce, and evolve through natural selection, but lack key characteristics (such as cell structure) that are generally considered necessary to count as life. Because they possess some but not all such qualities, viruses have been described as 'organisms at the edge of life', and as replicators. Viruses spread in many ways; viruses in plants are often transmitted from plant to plant by insects that feed on plant sap, such as aphids; viruses in animals can be carried by blood-sucking insects. These disease-bearing organisms are known as vectors. Influenza viruses are spread by coughing and sneezing. Norovirus and rotavirus, common causes of viral gastroenteritis, are transmitted by the faecal–oral route and are passed from person to person by contact, entering the body in food or water. HIV is one of several viruses transmitted through sexual contact and by exposure to infected blood. The variety of host cells that a virus can infect is called its 'host range'. This can be narrow, meaning a virus is capable of infecting few species, or broad, meaning it is capable of infecting many. Viral infections in animals provoke an immune response that usually eliminates the infecting virus. Immune responses can also be produced by vaccines, which confer an artificially acquired immunity to the specific viral infection. Some viruses, including those that cause AIDS and viral hepatitis, evade these immune responses and result in chronic infections. Several antiviral drugs have been developed. The word is from the Latin neuter vīrus referring to poison and other noxious liquids, from 'the same Indo-European base as Sanskrit viṣacode: san promoted to code: sa poison, Avestan vīša poison, ancient Greek ἰός poison', first attested in English in 1398 in John Trevisa's translation of Bartholomeus Anglicus's De Proprietatibus Rerum. Virulent, from Latin virulentus (poisonous), dates to c. 1400. A meaning of 'agent that causes infectious disease' is first recorded in 1728, before the discovery of viruses by Dmitri Ivanovsky in 1892. The English plural is viruses (sometimes also viri or vira), whereas the Latin word is a mass noun, which has no classically attested plural (vīra is used in Neo-Latin). The adjective viral dates to 1948. The term virion (plural virions), which dates from 1959, is also used to refer to a single viral particle that is released from the cell and is fully capable of infecting other cells of the same type. 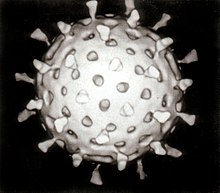