Nitrogen is the chemical element with the symbol N and atomic number 7. It was first discovered and isolated by Scottish physician Daniel Rutherford in 1772. Although Carl Wilhelm Scheele and Henry Cavendish had independently done so at about the same time, Rutherford is generally accorded the credit because his work was published first. The name nitrogène was suggested by French chemist Jean-Antoine-Claude Chaptal in 1790, when it was found that nitrogen was present in nitric acid and nitrates. Antoine Lavoisier suggested instead the name azote, from the Greek ἀζωτικός 'no life', as it is an asphyxiant gas; this name is instead used in many languages, such as French, Russian, Romanian and Turkish, and appears in the English names of some nitrogen compounds such as hydrazine, azides and azo compounds. Nitrogen is the lightest member of group 15 of the periodic table, often called the pnictogens. The name comes from the Greek πνίγειν 'to choke', directly referencing nitrogen's asphyxiating properties. It is a common element in the universe, estimated at about seventh in total abundance in the Milky Way and the Solar System. At standard temperature and pressure, two atoms of the element bind to form dinitrogen, a colourless and odorless diatomic gas with the formula N2. Dinitrogen forms about 78% of Earth's atmosphere, making it the most abundant uncombined element. Nitrogen occurs in all organisms, primarily in amino acids (and thus proteins), in the nucleic acids (DNA and RNA) and in the energy transfer molecule adenosine triphosphate. The human body contains about 3% nitrogen by mass, the fourth most abundant element in the body after oxygen, carbon, and hydrogen. The nitrogen cycle describes movement of the element from the air, into the biosphere and organic compounds, then back into the atmosphere. Many industrially important compounds, such as ammonia, nitric acid, organic nitrates (propellants and explosives), and cyanides, contain nitrogen. The extremely strong triple bond in elemental nitrogen (N≡N), the second strongest bond in any diatomic molecule after carbon monoxide (CO), dominates nitrogen chemistry. This causes difficulty for both organisms and industry in converting N2 into useful compounds, but at the same time means that burning, exploding, or decomposing nitrogen compounds to form nitrogen gas releases large amounts of often useful energy. Synthetically produced ammonia and nitrates are key industrial fertilisers, and fertiliser nitrates are key pollutants in the eutrophication of water systems. Apart from its use in fertilisers and energy-stores, nitrogen is a constituent of organic compounds as diverse as Kevlar used in high-strength fabric and cyanoacrylate used in superglue. Nitrogen is a constituent of every major pharmacological drug class, including antibiotics. Many drugs are mimics or prodrugs of natural nitrogen-containing signal molecules: for example, the organic nitrates nitroglycerin and nitroprusside control blood pressure by metabolizing into nitric oxide. Many notable nitrogen-containing drugs, such as the natural caffeine and morphine or the synthetic amphetamines, act on receptors of animal neurotransmitters. Nitrogen compounds have a very long history, ammonium chloride having been known to Herodotus. They were well known by the Middle Ages. Alchemists knew nitric acid as aqua fortis (strong water), as well as other nitrogen compounds such as ammonium salts and nitrate salts. The mixture of nitric and hydrochloric acids was known as aqua regia (royal water), celebrated for its ability to dissolve gold, the king of metals. The discovery of nitrogen is attributed to the Scottish physician Daniel Rutherford in 1772, who called it noxious air. Though he did not recognise it as an entirely different chemical substance, he clearly distinguished it from Joseph Black's 'fixed air', or carbon dioxide. The fact that there was a component of air that does not support combustion was clear to Rutherford, although he was not aware that it was an element. Nitrogen was also studied at about the same time by Carl Wilhelm Scheele, Henry Cavendish, and Joseph Priestley, who referred to it as burnt air or phlogisticated air. Nitrogen gas was inert enough that Antoine Lavoisier referred to it as 'mephitic air' or azote, from the Greek word άζωτικός (azotikos), 'no life'. In an atmosphere of pure nitrogen, animals died and flames were extinguished. Though Lavoisier's name was not accepted in English, since it was pointed out that almost all gases (indeed, with the sole exception of oxygen) are mephitic, it is used in many languages (French, Italian, Portuguese, Polish, Russian, Albanian, Turkish, etc.; the German Stickstoff similarly refers to the same characteristic, viz. ersticken 'to choke or suffocate') and still remains in English in the common names of many nitrogen compounds, such as hydrazine and compounds of the azide ion. Finally, it led to the name 'pnictogens' for the group headed by nitrogen, from the Greek πνίγειν 'to choke'. The English word nitrogen (1794) entered the language from the French nitrogène, coined in 1790 by French chemist Jean-Antoine Chaptal (1756–1832), from the French nitre (potassium nitrate, also called saltpeter) and the French suffix -gène, 'producing', from the Greek -γενής (-genes, 'begotten'). Chaptal's meaning was that nitrogen is the essential part of nitric acid, which in turn was produced from nitre. In earlier times, niter had been confused with Egyptian 'natron' (sodium carbonate) – called νίτρον (nitron) in Greek – which, despite the name, contained no nitrate. The earliest military, industrial, and agricultural applications of nitrogen compounds used saltpeter (sodium nitrate or potassium nitrate), most notably in gunpowder, and later as fertiliser. In 1910, Lord Rayleigh discovered that an electrical discharge in nitrogen gas produced 'active nitrogen', a monatomic allotrope of nitrogen. The 'whirling cloud of brilliant yellow light' produced by his apparatus reacted with mercury to produce explosive mercury nitride. 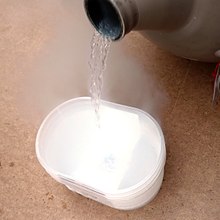