A stroke is a medical condition in which poor blood flow to the brain results in cell death. There are two main types of stroke: ischemic, due to lack of blood flow, and hemorrhagic, due to bleeding. Both result in parts of the brain not functioning properly. Signs and symptoms of a stroke may include an inability to move or feel on one side of the body, problems understanding or speaking, dizziness, or loss of vision to one side. Signs and symptoms often appear soon after the stroke has occurred. If symptoms last less than one or two hours it is known as a transient ischemic attack (TIA) or mini-stroke. A hemorrhagic stroke may also be associated with a severe headache. The symptoms of a stroke can be permanent. Long-term complications may include pneumonia or loss of bladder control. The main risk factor for stroke is high blood pressure. Other risk factors include tobacco smoking, obesity, high blood cholesterol, diabetes mellitus, a previous TIA, and atrial fibrillation. An ischemic stroke is typically caused by blockage of a blood vessel, though there are also less common causes. A hemorrhagic stroke is caused by either bleeding directly into the brain or into the space between the brain's membranes. Bleeding may occur due to a ruptured brain aneurysm. Diagnosis is typically based on a physical exam and supported by medical imaging such as a CT scan or MRI scan. A CT scan can rule out bleeding, but may not necessarily rule out ischemia, which early on typically does not show up on a CT scan. Other tests such as an electrocardiogram (ECG) and blood tests are done to determine risk factors and rule out other possible causes. Low blood sugar may cause similar symptoms. Prevention includes decreasing risk factors, as well as possibly aspirin, statins, surgery to open up the arteries to the brain in those with problematic narrowing, and warfarin in those with atrial fibrillation. A stroke or TIA often requires emergency care. An ischemic stroke, if detected within three to four and half hours, may be treatable with a medication that can break down the clot. Aspirin should be used. Some hemorrhagic strokes benefit from surgery. Treatment to try to recover lost function is called stroke rehabilitation and ideally takes place in a stroke unit; however, these are not available in much of the world. In 2013 approximately 6.9 million people had an ischemic stroke and 3.4 million people had a hemorrhagic stroke. In 2015 there were about 42.4 million people who had previously had a stroke and were still alive. Between 1990 and 2010 the number of strokes which occurred each year decreased by approximately 10% in the developed world and increased by 10% in the developing world. In 2015, stroke was the second most frequent cause of death after coronary artery disease, accounting for 6.3 million deaths (11% of the total). About 3.0 million deaths resulted from ischemic stroke while 3.3 million deaths resulted from hemorrhagic stroke. About half of people who have had a stroke live less than one year. Overall, two thirds of strokes occurred in those over 65 years old. Strokes can be classified into two major categories: ischemic and hemorrhagic. Ischemic strokes are caused by interruption of the blood supply to the brain, while hemorrhagic strokes result from the rupture of a blood vessel or an abnormal vascular structure. About 87% of strokes are ischemic, the rest being hemorrhagic. Bleeding can develop inside areas of ischemia, a condition known as 'hemorrhagic transformation.' It is unknown how many hemorrhagic strokes actually start as ischemic strokes. In the 1970s the World Health Organization defined stroke as a 'neurological deficit of cerebrovascular cause that persists beyond 24 hours or is interrupted by death within 24 hours', although the word 'stroke' is centuries old. This definition was supposed to reflect the reversibility of tissue damage and was devised for the purpose, with the time frame of 24 hours being chosen arbitrarily. The 24-hour limit divides stroke from transient ischemic attack, which is a related syndrome of stroke symptoms that resolve completely within 24 hours. With the availability of treatments which can reduce stroke severity when given early, many now prefer alternative terminology, such as brain attack and acute ischemic cerebrovascular syndrome (modeled after heart attack and acute coronary syndrome, respectively), to reflect the urgency of stroke symptoms and the need to act swiftly. 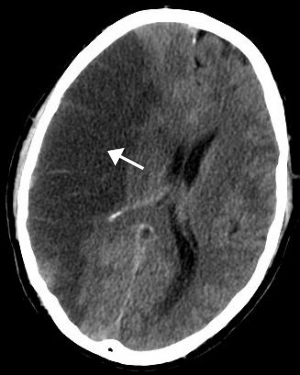