The Internet (portmanteau of interconnected network) is the global system of interconnected computer networks that use the Internet protocol suite (TCP/IP) to link devices worldwide. It is a network of networks that consists of private, public, academic, business, and government networks of local to global scope, linked by a broad array of electronic, wireless, and optical networking technologies. The Internet carries a vast range of information resources and services, such as the inter-linked hypertext documents and applications of the World Wide Web (WWW), electronic mail, telephony, and file sharing. The origins of the Internet date back to research commissioned by the federal government of the United States in the 1960s to build robust, fault-tolerant communication with computer networks. The primary precursor network, the ARPANET, initially served as a backbone for interconnection of regional academic and military networks in the 1980s. The funding of the National Science Foundation Network as a new backbone in the 1980s, as well as private funding for other commercial extensions, led to worldwide participation in the development of new networking technologies, and the merger of many networks. The linking of commercial networks and enterprises by the early 1990s marked the beginning of the transition to the modern Internet, and generated a sustained exponential growth as generations of institutional, personal, and mobile computers were connected to the network. Although the Internet was widely used by academia since the 1980s, commercialization incorporated its services and technologies into virtually every aspect of modern life. Most traditional communication media, including telephony, radio, television, paper mail and newspapers are reshaped, redefined, or even bypassed by the Internet, giving birth to new services such as email, Internet telephony, Internet television, online music, digital newspapers, and video streaming websites. Newspaper, book, and other print publishing are adapting to website technology, or are reshaped into blogging, web feeds and online news aggregators. The Internet has enabled and accelerated new forms of personal interactions through instant messaging, Internet forums, and social networking. Online shopping has grown exponentially both for major retailers and small businesses and entrepreneurs, as it enables firms to extend their 'brick and mortar' presence to serve a larger market or even sell goods and services entirely online. Business-to-business and financial services on the Internet affect supply chains across entire industries. The Internet has no single centralized governance in either technological implementation or policies for access and usage; each constituent network sets its own policies. The overreaching definitions of the two principal name spaces in the Internet, the Internet Protocol address (IP address) space and the Domain Name System (DNS), are directed by a maintainer organization, the Internet Corporation for Assigned Names and Numbers (ICANN). The technical underpinning and standardization of the core protocols is an activity of the Internet Engineering Task Force (IETF), a non-profit organization of loosely affiliated international participants that anyone may associate with by contributing technical expertise. In November 2006, the Internet was included on USA Today's list of New Seven Wonders. When the term Internet is used to refer to the specific global system of interconnected Internet Protocol (IP) networks, the word is a proper noun that should be written with an initial capital letter. In common use and the media, it is often not capitalized, viz. the internet. Some guides specify that the word should be capitalized when used as a noun, but not capitalized when used as an adjective. The Internet is also often referred to as the Net, as a short form of network. Historically, as early as 1849, the word internetted was used uncapitalized as an adjective, meaning interconnected or interwoven. The designers of early computer networks used internet both as a noun and as a verb in shorthand form of internetwork or internetworking, meaning interconnecting computer networks. The terms Internet and World Wide Web are often used interchangeably in everyday speech; it is common to speak of 'going on the Internet' when using a web browser to view web pages. However, the World Wide Web or the Web is only one of a large number of Internet services. The Web is a collection of interconnected documents (web pages) and other web resources, linked by hyperlinks and URLs. As another point of comparison, Hypertext Transfer Protocol, or HTTP, is the language used on the Web for information transfer, yet it is just one of many languages or protocols that can be used for communication on the Internet. The term Interweb is a portmanteau of Internet and World Wide Web typically used sarcastically to parody a technically unsavvy user. The development of the transistor was fundamental to the Internet. The first transistor was invented by William Shockley, Walter Houser Brattain and John Bardeen at Bell Labs in 1947. The MOSFET (metal-oxide-silicon field-effect transistor), also known as the MOS transistor, was then invented by Mohamed Atalla and Dawon Kahng at Bell Labs in 1959. The MOSFET is the building block or 'workhorse' of the information revolution and the information age, and the most widely manufactured device in history. Power MOSFETs and MOS integrated circuits power the Internet, and the communications infrastructure that enables the Internet. Essential elements of the Internet that are built from MOSFETs include mobile devices, tranceivers, base station modules, routers, RF power amplifiers, microprocessors, memory chips, and telecommunication circuits. 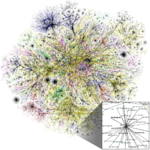