A quark (/kwɔːrk, kwɑːrk/) is a type of elementary particle and a fundamental constituent of matter. Quarks combine to form composite particles called hadrons, the most stable of which are protons and neutrons, the components of atomic nuclei. Due to a phenomenon known as color confinement, quarks are never directly observed or found in isolation; they can be found only within hadrons, which include baryons (such as protons and neutrons) and mesons. For this reason, much of what is known about quarks has been drawn from observations of hadrons. Quarks have various intrinsic properties, including electric charge, mass, color charge, and spin. They are the only elementary particles in the Standard Model of particle physics to experience all four fundamental interactions, also known as fundamental forces (electromagnetism, gravitation, strong interaction, and weak interaction), as well as the only known particles whose electric charges are not integer multiples of the elementary charge. There are six types, known as flavors, of quarks: up, down, strange, charm, bottom, and top. Up and down quarks have the lowest masses of all quarks. The heavier quarks rapidly change into up and down quarks through a process of particle decay: the transformation from a higher mass state to a lower mass state. Because of this, up and down quarks are generally stable and the most common in the universe, whereas strange, charm, bottom, and top quarks can only be produced in high energy collisions (such as those involving cosmic rays and in particle accelerators). For every quark flavor there is a corresponding type of antiparticle, known as an antiquark, that differs from the quark only in that some of its properties (such as the electric charge) have equal magnitude but opposite sign. The quark model was independently proposed by physicists Murray Gell-Mann and George Zweig in 1964. Quarks were introduced as parts of an ordering scheme for hadrons, and there was little evidence for their physical existence until deep inelastic scattering experiments at the Stanford Linear Accelerator Center in 1968. Accelerator experiments have provided evidence for all six flavors. The top quark, first observed at Fermilab in 1995, was the last to be discovered. The Standard Model is the theoretical framework describing all the currently known elementary particles. This model contains six flavors of quarks (q), named up (u), down (d), strange (s), charm (c), bottom (b), and top (t). Antiparticles of quarks are called antiquarks, and are denoted by a bar over the symbol for the corresponding quark, such as u for an up antiquark. As with antimatter in general, antiquarks have the same mass, mean lifetime, and spin as their respective quarks, but the electric charge and other charges have the opposite sign. Quarks are spin-​1⁄2 particles, implying that they are fermions according to the spin–statistics theorem. They are subject to the Pauli exclusion principle, which states that no two identical fermions can simultaneously occupy the same quantum state. This is in contrast to bosons (particles with integer spin), of which any number can be in the same state. Unlike leptons, quarks possess color charge, which causes them to engage in the strong interaction. The resulting attraction between different quarks causes the formation of composite particles known as hadrons (see 'Strong interaction and color charge' below). The quarks that determine the quantum numbers of hadrons are called valence quarks; apart from these, any hadron may contain an indefinite number of virtual 'sea' quarks, antiquarks, and gluons, which do not influence its quantum numbers. There are two families of hadrons: baryons, with three valence quarks, and mesons, with a valence quark and an antiquark. The most common baryons are the proton and the neutron, the building blocks of the atomic nucleus. A great number of hadrons are known (see list of baryons and list of mesons), most of them differentiated by their quark content and the properties these constituent quarks confer. The existence of 'exotic' hadrons with more valence quarks, such as tetraquarks (qqqq) and pentaquarks (qqqqq), was conjectured from the beginnings of the quark model but not discovered until the early 21st century. Elementary fermions are grouped into three generations, each comprising two leptons and two quarks. The first generation includes up and down quarks, the second strange and charm quarks, and the third bottom and top quarks. All searches for a fourth generation of quarks and other elementary fermions have failed, and there is strong indirect evidence that no more than three generations exist. Particles in higher generations generally have greater mass and less stability, causing them to decay into lower-generation particles by means of weak interactions. Only first-generation (up and down) quarks occur commonly in nature. Heavier quarks can only be created in high-energy collisions (such as in those involving cosmic rays), and decay quickly; however, they are thought to have been present during the first fractions of a second after the Big Bang, when the universe was in an extremely hot and dense phase (the quark epoch). Studies of heavier quarks are conducted in artificially created conditions, such as in particle accelerators. 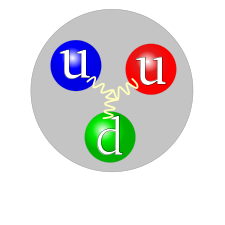