Large for gestational age (LGA) is an indication of high prenatal growth rate. Large for gestational age (LGA) is an indication of high prenatal growth rate. LGA is often defined as a weight, length, or head circumference that lies above the 90th percentile for that gestational age. However, it has been suggested that the definition be restricted to infants with birth weights greater than the 97th percentile (2 standard deviations above the mean) as this more accurately describes infants who are at greatest risk for perinatal morbidity and mortality. Macrosomia, which literally means 'large body', is sometimes used for LGA. Some experts consider a baby to be big when it weighs more than 8 pounds 13 ounces (4,000 g) at birth, and others say a baby is big if it weighs more than 9 pounds 15 ounces (4,500 g). A baby is also called “large for gestational age” if its weight is greater than the 90th percentile at birth. Common risks in LGA babies include shoulder dystocia, hypoglycemia, metatarsus adductus, hip subluxation and talipes calcaneovalgus due to intrauterine deformation. Shoulder dystocia can result from the anterior shoulder becoming impacted on the maternal symphysis pubis. The doctor or midwife will try to push the baby's anterior shoulder downward to pass through the birth canal and clear the woman's symphysis pubis. This can be difficult if the child is LGA, since the birth canal is 10 cm when fully dilated for most women and there may not be much room to move the baby. If shoulder dystocia occurs, there are various manoeuvres which can be performed by the birth attendant to try to deliver the shoulders. These generally involve trying to turn the shoulders into the oblique, using suprapubic pressure to disimpact the anterior shoulder from above the symphysis pubis, or delivering the posterior arm first. If these do not resolve the situation, the provider may intentionally snap the baby's clavicle (bone that holds shoulder in place) in order to displace the shoulder and allow the child to be delivered. The bone should heal spontaneously, and most babies will make a full recovery from this birth injury.. There is still a risk of temporary or permanent nerve damage to the baby's arm, or other injuries such as humeral fracture. Although big babies are at higher risk for shoulder dystocia, most cases of shoulder dystocia happen in smaller babies because there are many more small and normal-size babies being born than big babies. Researchers have found that it is impossible to predict who will have shoulder dystocia and who will not. In non-diabetic women, shoulder dystocia happens 0.65% of the time in babies that weigh less than 8 pounds 13 ounces (4,000 g), 6.7% of the time in babies that weigh 8 pounds 13 ounces (4,000 g) to 9 pounds 15 ounces (4,500 g), and 14.5% of the time in babies that weigh more than 9 pounds 15 ounces (4,500 g). Induction of labour for women with a baby with suspected macrosomia leads to babies being born at a lower birth weight, with fewer bone fractures and less shoulder dystocia, but could increase the number of women with perineal tears. Predicting a baby’s weight can be inaccurate and women could be worried unnecessarily, and request their labour to be induced for no reason. Doctors disagree whether women should be induced for suspected macrosomia and more research is needed to find out what this is best for women and their babies. Big babies are at higher risk of hypoglycemia in the neonatal period, independent of whether the mother has diabetes. 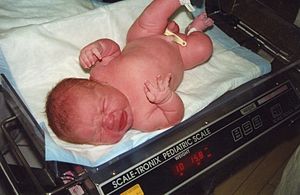