Geometry (from the Ancient Greek: γεωμετρία; geo- 'earth', -metron 'measurement') is a branch of mathematics concerned with questions of shape, size, relative position of figures, and the properties of space. A mathematician who works in the field of geometry is called a geometer. Geometry arose independently in a number of early cultures as a practical way for dealing with lengths, areas, and volumes. Geometry began to see elements of formal mathematical science emerging in the West as early as the 6th century BC. By the 3rd century BC, geometry was put into an axiomatic form by Euclid, whose treatment, Euclid's Elements, set a standard for many centuries to follow. Geometry arose independently in India, with texts providing rules for geometric constructions appearing as early as the 3rd century BC. Islamic scientists preserved Greek ideas and expanded on them during the Middle Ages. By the early 17th century, geometry had been put on a solid analytic footing by mathematicians such as René Descartes and Pierre de Fermat. Since then, and into modern times, geometry has expanded into non-Euclidean geometry and manifolds, describing spaces that lie beyond the normal range of human experience. While geometry has evolved significantly throughout the years, there are some general concepts that are more or less fundamental to geometry. These include the concepts of points, lines, planes, surfaces, angles, and curves, as well as the more advanced notions of manifolds and topology or metric. 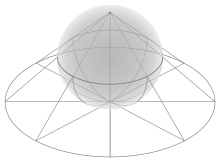