Coal is a combustible black or brownish-black sedimentary rock, formed as rock strata called coal seams. Coal is mostly carbon with variable amounts of other elements; chiefly hydrogen, sulfur, oxygen, and nitrogen.Coal is formed if dead plant matter decays into peat and over millions of years the heat and pressure of deep burial converts the peat into coal. Vast deposits of coal originates in former wetlands—called coal forests—that covered much of the Earth's tropical land areas during the late Carboniferous (Pennsylvanian) and Permian times. As a fossil fuel burned for heat, coal supplies about a quarter of the world's primary energy and two-fifths of its electricity. Some iron and steel making and other industrial processes burn coal. The extraction and use of coal causes many premature deaths and much illness. Coal industry damages the environment, including by climate change as it is the largest anthropogenic source of carbon dioxide, 14 Gt in 2016, which is 40% of the total fossil fuel emissions. As part of the worldwide energy transition many countries have stopped using or use less coal, and the UN Secretary General has asked governments to stop building new coal plants by 2020. The largest consumer and importer of coal is China. China mines almost half the world's coal, followed by India with about a tenth. Australia accounts for about a third of world coal exports followed by Indonesia and Russia. The word originally took the form col in Old English, from Proto-Germanic *kula(n), which in turn is hypothesized to come from the Proto-Indo-European root *g(e)u-lo- 'live coal'. Germanic cognates include the Old Frisian kole, Middle Dutch cole, Dutch kool, Old High German chol, German Kohle and Old Norse kol, and the Irish word gual is also a cognate via the Indo-European root. Coal is composed of macerals, minerals and water. Fossils and amber may be found in coal. At various times in the geologic past, the Earth had dense forests in low-lying wetland areas. Due to natural processes such as flooding, these forests were buried underneath soil. As more and more soil deposited over them, they were compressed. The temperature also rose as they sank deeper and deeper. As the process continued the plant matter was protected from biodegradation and oxidation, usually by mud or acidic water. This trapped the carbon in immense peat bogs that were eventually covered and deeply buried by sediments. Under high pressure and high temperature, dead vegetation was slowly converted to coal. The conversion of dead vegetation into coal is called coalification. Coalification starts with dead plant matter decaying into peat. Then over millions of years the heat and pressure of deep burial causes the loss of water, methane and carbon dioxide and an increase in the proportion of carbon. Thus first lignite (also called 'brown coal'), then sub-bituminous coal, bituminous coal, and lastly anthracite (also called 'hard coal' or 'black coal') may be formed. 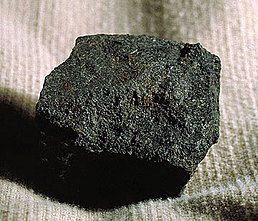