The Standard Model of particle physics is the theory describing three of the four known fundamental forces (the electromagnetic, weak, and strong interactions, and not including the gravitational force) in the universe, as well as classifying all known elementary particles. It was developed in stages throughout the latter half of the 20th century, through the work of many scientists around the world, with the current formulation being finalized in the mid-1970s upon experimental confirmation of the existence of quarks. Since then, confirmation of the top quark (1995), the tau neutrino (2000), and the Higgs boson (2012) have added further credence to the Standard Model. In addition, the Standard Model has predicted various properties of weak neutral currents and the W and Z bosons with great accuracy. Although the Standard Model is believed to be theoretically self-consistent and has demonstrated huge successes in providing experimental predictions, it leaves some phenomena unexplained and falls short of being a complete theory of fundamental interactions. It does not fully explain baryon asymmetry, incorporate the full theory of gravitation as described by general relativity, or account for the accelerating expansion of the Universe as possibly described by dark energy. The model does not contain any viable dark matter particle that possesses all of the required properties deduced from observational cosmology. It also does not incorporate neutrino oscillations and their non-zero masses. The development of the Standard Model was driven by theoretical and experimental particle physicists alike. For theorists, the Standard Model is a paradigm of a quantum field theory, which exhibits a wide range of physics including spontaneous symmetry breaking, anomalies and non-perturbative behavior. It is used as a basis for building more exotic models that incorporate hypothetical particles, extra dimensions, and elaborate symmetries (such as supersymmetry) in an attempt to explain experimental results at variance with the Standard Model, such as the existence of dark matter and neutrino oscillations. In 1954, Chen Ning Yang and Robert Mills extended the concept of gauge theory for abelian groups, e.g. quantum electrodynamics, to nonabelian groups to provide an explanation for strong interactions. In 1961, Sheldon Glashow combined the electromagnetic and weak interactions. In 1967 Steven Weinberg and Abdus Salam incorporated the Higgs mechanism into Glashow's electroweak interaction, giving it its modern form. The Higgs mechanism is believed to give rise to the masses of all the elementary particles in the Standard Model. This includes the masses of the W and Z bosons, and the masses of the fermions, i.e. the quarks and leptons. After the neutral weak currents caused by Z boson exchange were discovered at CERN in 1973, the electroweak theory became widely accepted and Glashow, Salam, and Weinberg shared the 1979 Nobel Prize in Physics for discovering it. The W± and Z0 bosons were discovered experimentally in 1983; and the ratio of their masses was found to be as the Standard Model predicted. The theory of the strong interaction (i.e. quantum chromodynamics, QCD), to which many contributed, acquired its modern form in 1973–74 when asymptotic freedom was proposed (a development which made QCD the main focus of theoretical research) and experiments confirmed that the hadrons were composed of fractionally charged quarks. The term 'Standard Model' was first coined by Abraham Pais and Sam Treiman in 1975, with reference to the electroweak theory with four quarks. 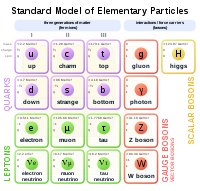