Collective intelligenceCollective actionSelf-organized criticalityHerd mentalityPhase transitionAgent-based modellingSynchronizationAnt colony optimizationParticle swarm optimizationSocial network analysisSmall-world networksCommunity identificationCentralityMotifsGraph TheoryScalingRobustnessSystems biologyDynamic networksEvolutionary computationGenetic algorithmsGenetic programmingArtificial lifeMachine learningEvolutionary developmental biologyArtificial intelligenceEvolutionary roboticsReaction-diffusion systemsPartial differential equationsDissipative structuresPercolationCellular automataSpatial ecologySelf-replicationSpatial evolutionary biologyOperationalizationFeedbackSelf-referenceGoal-orientedSystem dynamicsSensemakingEntropyCyberneticsAutopoiesisInformation theoryComputation theoryOrdinary differential equationsIterative mapsPhase spaceAttractorsStability analysisPopulation dynamicsChaosMultistabilityBifurcationRational choice theoryBounded rationalityIrrational behaviourScalability is the property of a system to handle a growing amount of work by adding resources to the system. Scalability is the property of a system to handle a growing amount of work by adding resources to the system. In an economic context, a scalable business model implies that a company can increase sales given increased resources. For example, a package delivery system is scalable because more packages can be delivered by adding more delivery vehicles. However, if all packages had to first pass through a single warehouse for sorting, the system would not be scalable, because one warehouse can handle only a limited number of packages. In computing, scalability is a characteristic of computers, networks, algorithms, networking protocols, programs and applications. An example is a search engine, which must support increasing numbers of users, and the number of topics it indexes. The Incident Command System (ICS) is the emergency management system used across emergency response agencies in the United States. ICS can scale resource coordination from a single-engine roadside brushfire to an interstate wildfire. The first resource on scene establishes command, with authority to order resources and delegate responsibility (managing five to seven officers, who will again delegate to up to seven, and on as the incident grows). As an incident expands, more senior officers assume command. Scalability can be measured over multiple dimensions, such as: Resources fall into two broad categories: horizontal and vertical. Scaling horizontally (out/in) means adding more nodes to (or removing nodes from) a system, such as adding a new computer to a distributed software application. An example might involve scaling out from one web server to three. High-performance computing applications such as seismic analysis and biotechnology workloads scaled horizontally to support tasks that once would have required expensive supercomputers. Other workloads, such as large social networks exceed the capacity of the largest supercomputer and can only be handled by scalable systems. Exploiting this scalability requires software for efficient resource management and maintenance. Scaling vertically (up/down) means adding resources to (or removing resources from) a single node, typically involving the addition of CPUs, memory or storage to a single computer. Larger numbers of elements increases management complexity, more sophisticated programming to allocate tasks among resources and handle issues such as throughput and latency across nodes, while some applications do not scale horizontally. 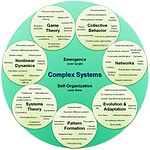