Intensive care medicine, or critical care medicine, is a branch of medicine concerned with the diagnosis and management of life-threatening conditions that may require sophisticated life support and intensive monitoring. Patients requiring intensive care may require support for cardiovascular instability (hypertension/hypotension), potentially lethal cardiac arrhythmias, airway or respiratory compromise (such as ventilator support), acute renal failure, or the cumulative effects of multiple organ failure, more commonly referred to now as multiple organ dysfunction syndrome. They may also be admitted for intensive/invasive monitoring, such as the crucial hours after major surgery when deemed too unstable to transfer to a less intensively monitored unit. Medical studies suggest a relation between ICU volume and quality of care for mechanically ventilated patients. After adjustment for severity of illness, demographic variables, and characteristics of the ICUs (including staffing by intensivists), higher ICU volume was significantly associated with lower ICU and hospital mortality rates. For example, adjusted ICU mortality (for a patient at average predicted risk for ICU death) was 21.2% in hospitals with 87 to 150 mechanically ventilated patients annually, and 14.5% in hospitals with 401 to 617 mechanically ventilated patients annually. Hospitals with intermediate numbers of patients had outcomes between these extremes. ICU delirium, formerly and inaccurately referred to as ICU psychosis, is a syndrome common in intensive care and cardiac units where patients who are in unfamiliar, monotonous surroundings develop symptoms of delirium (Maxmen & Ward, 1995). This may include interpreting machine noises as human voices, seeing walls quiver, or hallucinating that someone is tapping them on the shoulder. There exists systematic reviews in which interventions of sleep promotion related outcomes in the ICU have proven impactful in the overall health of patients in the ICU. In general, it is the most expensive, technologically advanced and resource-intensive area of medical care. In the United States, estimates of the 2000 expenditure for critical care medicine ranged from US$15–55 billion. During that year, critical care medicine accounted for 0.56% of GDP, 4.2% of national health expenditure and about 13% of hospital costs.In 2011, hospital stays with ICU services accounted for just over one-quarter of all discharges (29.9%) but nearly one-half of aggregate total hospital charges (47.5%) in the United States. The mean hospital charge was 2.5 times higher for discharges with ICU services than for those without. 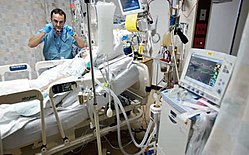