Psoriasis is a long-lasting autoimmune disease characterized by patches of abnormal skin. These skin patches are typically red, dry, itchy, and scaly. On people with darker skin the patches may be purple in colour. Psoriasis varies in severity from small, localized patches to complete body coverage. Injury to the skin can trigger psoriatic skin changes at that spot, which is known as the Koebner phenomenon. There are five main types of psoriasis: plaque, guttate, inverse, pustular, and erythrodermic. Plaque psoriasis, also known as psoriasis vulgaris, makes up about 90 percent of cases. It typically presents as red patches with white scales on top. Areas of the body most commonly affected are the back of the forearms, shins, navel area, and scalp. Guttate psoriasis has drop-shaped lesions. Pustular psoriasis presents as small non-infectious pus-filled blisters. Inverse psoriasis forms red patches in skin folds. Erythrodermic psoriasis occurs when the rash becomes very widespread, and can develop from any of the other types. Fingernails and toenails are affected in most people with psoriasis at some point in time. This may include pits in the nails or changes in nail color. Psoriasis is generally thought to be a genetic disease that is triggered by environmental factors. In twin studies, identical twins are three times more likely to be affected compared to non-identical twins. This suggests that genetic factors predispose to psoriasis. Symptoms often worsen during winter and with certain medications, such as beta blockers or NSAIDs. Infections and psychological stress can also play a role. Psoriasis is not contagious. The underlying mechanism involves the immune system reacting to skin cells. Diagnosis is typically based on the signs and symptoms. There is no cure for psoriasis; however, various treatments can help control the symptoms. These treatments include steroid creams, vitamin D3 cream, ultraviolet light and immune system suppressing medications, such as methotrexate. About 75 percent of cases can be managed with creams alone. The disease affects two to four percent of the population. Men and women are affected with equal frequency. The disease may begin at any age, but typically starts in adulthood. Psoriasis is associated with an increased risk of psoriatic arthritis, lymphomas, cardiovascular disease, Crohn disease, and depression. Psoriatic arthritis affects up to 30 percent of individuals with psoriasis. Psoriasis vulgaris (also known as chronic stationary psoriasis or plaque-like psoriasis) is the most common form and affects 85%–90% of people with psoriasis. Plaque psoriasis typically appears as raised areas of inflamed skin covered with silvery-white scaly skin. These areas are called plaques and are most commonly found on the elbows, knees, scalp, and back. Psoriatic erythroderma (erythrodermic psoriasis) involves widespread inflammation and exfoliation of the skin over most of the body surface. It may be accompanied by severe dryness, itching, swelling, and pain. It is often the result of an exacerbation of unstable plaque psoriasis, particularly following the abrupt withdrawal of systemic glucocorticoids. This form of psoriasis can be fatal as the extreme inflammation and exfoliation disrupt the body's ability to regulate temperature and perform barrier functions. Additional types of psoriasis comprise approximately 10% of cases. They include pustular, inverse, napkin, guttate, oral, and seborrheic-like forms. Pustular psoriasis appears as raised bumps filled with noninfectious pus (pustules). The skin under and surrounding the pustules is red and tender. Inverse psoriasis (also known as flexural psoriasis) appears as smooth, inflamed patches of skin. The patches frequently affect skin folds, particularly around the genitals (between the thigh and groin), the armpits, in the skin folds of an overweight abdomen (known as panniculus), between the buttocks in the intergluteal cleft, and under the breasts in the inframammary fold. Heat, trauma, and infection are thought to play a role in the development of this atypical form of psoriasis. 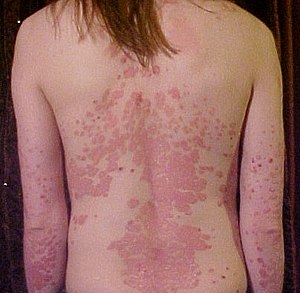