Autism spectrum, also known as autism spectrum disorder (ASD), is a range of mental disorders of the neurodevelopmental type. It includes autism and Asperger syndrome. Individuals on the spectrum often experience difficulties with social communication and interaction; and restricted, repetitive patterns of behavior, interests or activities. Symptoms are typically recognized between one and two years of age. Long-term problems may include difficulties in performing daily tasks, creating and keeping relationships, and maintaining a job. The cause of autism spectrum is uncertain. Risk factors include having an older parent, a family history of autism, and certain genetic conditions. It is estimated that between 64% and 91% of risk is due to family history. Diagnosis is based on symptoms. The DSM-5 redefined the autism spectrum disorders to encompass the previous diagnoses of autism, Asperger syndrome, pervasive developmental disorder not otherwise specified (PDD-NOS), and childhood disintegrative disorder. Treatment efforts are generally individualized, and can include behavioural therapy, and the teaching of coping skills. Medications may be used to try to help improve symptoms. Evidence to support the use of medications, however, is not very strong. Autism spectrum is estimated to affect about 1% of people (62.2 million globally as of 2015). Males are diagnosed more often than females. The term 'spectrum' can refer to the range of symptoms or their severity, leading some to favor a distinction between severely disabled autistics who cannot speak or look after themselves, and higher functioning autistics. In the United States, a revision to autism spectrum disorder (ASD) was presented in the Diagnostic and Statistical Manual of Mental Disorders version 5 (DSM-5), released May 2013. The new diagnosis encompasses previous diagnoses of autistic disorder, Asperger syndrome, childhood disintegrative disorder, and PDD-NOS. Compared with the DSM-IV diagnosis of autistic disorder, the DSM-5 diagnosis of ASD no longer includes communication as a separate criterion, and has merged social interaction and communication into one category. Slightly different diagnostic definitions are used in other countries. For example, the ICD-10 is the most commonly-used diagnostic manual in the UK and European Union.Rather than categorizing these diagnoses, the DSM-5 has adopted a dimensional approach to diagnosing disorders that fall underneath the autism spectrum umbrella. Some have proposed that individuals on the autism spectrum may be better represented as a single diagnostic category. Within this category, the DSM-5 has proposed a framework of differentiating each individual by dimensions of severity, as well as associated features (i.e., known genetic disorders, and intellectual disability). Another change to the DSM includes collapsing social and communication deficits into one domain. Thus, an individual with an ASD diagnosis will be described in terms of severity of social communication symptoms, severity of fixated or restricted behaviors or interests, hyper- or hyposensitivity to sensory stimuli, and associated features. The restricting of onset age has also been loosened from 3 years of age to 'early developmental period', with a note that symptoms may manifest later when social demands exceed capabilities. Autism forms the core of the autism spectrum disorders. Asperger syndrome is closest to autism in signs and likely causes; unlike autism, people with Asperger syndrome usually have no significant delay in language development, according to the older DSM-IV criteria. PDD-NOS is diagnosed when the criteria are not met for a more specific disorder. Some sources also include Rett syndrome and childhood disintegrative disorder, which share several signs with autism but may have unrelated causes; other sources differentiate them from ASD, but group all of the above conditions into the pervasive developmental disorders. Autism, Asperger syndrome, and PDD-NOS are sometimes called the autistic disorders instead of ASD, whereas autism itself is often called autistic disorder, childhood autism, or infantile autism. Although the older term pervasive developmental disorder and the newer term autism spectrum disorder largely or entirely overlap, the earlier was intended to describe a specific set of diagnostic labels, whereas the latter refers to a postulated spectrum disorder linking various conditions. ASD is a subset of the broader autism phenotype (BAP), which describes individuals who may not have ASD but do have autistic-like traits, such as avoiding eye contact. 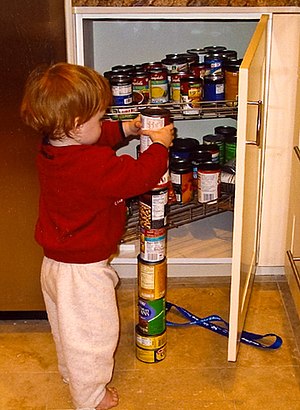