Medical imaging is the technique and process of creating visual representations of the interior of a body for clinical analysis and medical intervention, as well as visual representation of the function of some organs or tissues (physiology). Medical imaging seeks to reveal internal structures hidden by the skin and bones, as well as to diagnose and treat disease. Medical imaging also establishes a database of normal anatomy and physiology to make it possible to identify abnormalities. Although imaging of removed organs and tissues can be performed for medical reasons, such procedures are usually considered part of pathology instead of medical imaging.In the clinical context, 'invisible light' medical imaging is generally equated to radiology or 'clinical imaging' and the medical practitioner responsible for interpreting (and sometimes acquiring) the images is a radiologist. 'Visible light' medical imaging involves digital video or still pictures that can be seen without special equipment. Dermatology and wound care are two modalities that use visible light imagery. Diagnostic radiography designates the technical aspects of medical imaging and in particular the acquisition of medical images. The radiographer or radiologic technologist is usually responsible for acquiring medical images of diagnostic quality, although some radiological interventions are performed by radiologists.Medical imaging may be indicated in pregnancy because of pregnancy complications, intercurrent diseases or routine prenatal care. Magnetic resonance imaging (MRI) without MRI contrast agents as well as obstetric ultrasonography are not associated with any risk for the mother or the fetus, and are the imaging techniques of choice for pregnant women. Projectional radiography, X-ray computed tomography and nuclear medicine imaging result some degree of ionizing radiation exposure, but have with a few exceptions much lower absorbed doses than what are associated with fetal harm. At higher dosages, effects can include miscarriage, birth defects and intellectual disability.The amount of data obtained in a single MR or CT scan is very extensive. Some of the data that radiologists discard could save patients time and money, while reducing their exposure to radiation and risk of complications from invasive procedures. Another approach for making the procedures more efficient is based on utilizing additional constraints, e.g., in some medical imaging modalities one can improve the efficiency of the data acquisition by taking into account the fact the reconstructed density is positive.Volume rendering techniques have been developed to enable CT, MRI and ultrasound scanning software to produce 3D images for the physician. Traditionally CT and MRI scans produced 2D static output on film. To produce 3D images, many scans are made and then combined by computers to produce a 3D model, which can then be manipulated by the physician. 3D ultrasounds are produced using a somewhat similar technique.In diagnosing disease of the viscera of the abdomen, ultrasound is particularly sensitive on imaging of biliary tract, urinary tract and female reproductive organs (ovary, fallopian tubes). As for example, diagnosis of gallstone by dilatation of common bile duct and stone in the common bile duct.With the ability to visualize important structures in great detail, 3D visualization methods are a valuable resource for the diagnosis and surgical treatment of many pathologies. It was a key resource for the famous, but ultimately unsuccessful attempt by Singaporean surgeons to separate Iranian twins Ladan and Laleh Bijani in 2003. The 3D equipment was used previously for similar operations with great success.Neuroimaging has also been used in experimental circumstances to allow people (especially disabled persons) to control outside devices, acting as a brain computer interface.Used primarily in ultrasound imaging, capturing the image produced by a medical imaging device is required for archiving and telemedicine applications. In most scenarios, a frame grabber is used in order to capture the video signal from the medical device and relay it to a computer for further processing and operations.Medical imaging has become a major tool in clinical trials since it enables rapid diagnosis with visualization and quantitative assessment.Lead is the main material used for radiographic shielding against scattered X-rays.Medical imaging are generally covered by laws of medical privacy. For example, in the United States the Health Insurance Portability and Accountability Act (HIPAA) sets restrictions for health care providers on utilizing protected health information, which is any individually identifiable information relating to the past, present, or future physical or mental health of any individual. While there has not been any definitive legal decision in the matter, at least one study has indicated that medical imaging may contain biometric information that can uniquely identify a person, and so may qualify as PHI.Organizations in the medical imaging industry include manufacturers of imaging equipment, freestanding radiology facilities, and hospitals.As per Compendium: Chapter 300 by the US Copyright Office, 'the Office will not register works produced by a machine or mere mechanical process that operates randomly or automatically without any creative input or intervention from a human author.' including 'Medical imaging produced by x-rays, ultrasounds, magnetic resonance imaging, or other diagnostic equipment.' This position differs from the broad copyright protections afforded to photographs. While the Copyright Compendium is an agency statutory interpretation and not legally binding, courts are likely to give deference to it if they find it reasonable. Yet, there is no U.S. federal case law directly addressing the issue of the copyrightability of x-ray images.A “derivative work” is a work based upon one or more preexisting works, such as a translation... art reproduction, abridgment, condensation, or any other form in which a work may be recast, transformed, or adapted. A work consisting of editorial revisions, annotations, elaborations, or other modifications which, as a whole, represent an original work of authorship, is a “derivative work”.The copyright in a compilation or derivative work extends only to the material contributed by the author of such work, as distinguished from the preexisting material employed in the work, and does not imply any exclusive right in the preexisting material. The copyright in such work is independent of, and does not affect or enlarge the scope, duration, ownership, or subsistence of, any copyright protection in the preexisting material. 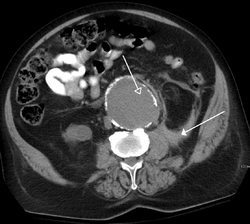