Perception (from the Latin perceptio) is the organization, identification, and interpretation of sensory information in order to represent and understand the presented information, or the environment. All perception involves signals that go through the nervous system, which in turn result from physical or chemical stimulation of the sensory system. For example, vision involves light striking the retina of the eye, smell is mediated by odor molecules, and hearing involves pressure waves. Perception is not only the passive receipt of these signals, but it's also shaped by the recipient's learning, memory, expectation, and attention. Perception can be split into two processes, Perception depends on complex functions of the nervous system, but subjectively seems mostly effortless because this processing happens outside conscious awareness. Since the rise of experimental psychology in the 19th century, psychology's understanding of perception has progressed by combining a variety of techniques. Psychophysics quantitatively describes the relationships between the physical qualities of the sensory input and perception. Sensory neuroscience studies the neural mechanisms underlying perception. Perceptual systems can also be studied computationally, in terms of the information they process. Perceptual issues in philosophy include the extent to which sensory qualities such as sound, smell or color exist in objective reality rather than in the mind of the perceiver. Although the senses were traditionally viewed as passive receptors, the study of illusions and ambiguous images has demonstrated that the brain's perceptual systems actively and pre-consciously attempt to make sense of their input. There is still active debate about the extent to which perception is an active process of hypothesis testing, analogous to science, or whether realistic sensory information is rich enough to make this process unnecessary. The perceptual systems of the brain enable individuals to see the world around them as stable, even though the sensory information is typically incomplete and rapidly varying. Human and animal brains are structured in a modular way, with different areas processing different kinds of sensory information. Some of these modules take the form of sensory maps, mapping some aspect of the world across part of the brain's surface. These different modules are interconnected and influence each other. For instance, taste is strongly influenced by smell. 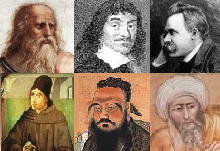