Statins, also known as HMG-CoA reductase inhibitors, are a class of lipid-lowering medications that reduce illness and mortality in those who are at high risk of cardiovascular disease. Low-density lipoprotein (LDL) carriers of cholesterol play a key role in the development of atherosclerosis and coronary heart disease via the mechanisms described by the lipid hypothesis. Statins are effective in lowering LDL cholesterol and so are widely used for primary prevention in people at high risk of cardiovascular disease, as well as in secondary prevention for those who have developed cardiovascular disease. Side effects of statins include muscle pain, increased risk of diabetes mellitus, and abnormal blood levels of liver enzymes. Additionally, they have rare but severe adverse effects, particularly muscle damage. They inhibit the enzyme HMG-CoA reductase which plays a central role in the production of cholesterol. High cholesterol levels have been associated with cardiovascular disease. There are various forms of statins, some of which include atorvastatin, fluvastatin, lovastatin, pitavastatin, pravastatin, rosuvastatin, and simvastatin. Several combination preparations of a statin and another agent, such as ezetimibe/simvastatin, are also available. In 2005, sales were estimated at US$18.7 billion in the United States. The best-selling statin is atorvastatin, also known as Lipitor, which in 2003 became the best-selling pharmaceutical in history. The manufacturer Pfizer reported sales of US$12.4 billion in 2008. Due to patent expirations, several statins became available in 2016 as less expensive generics. Statins are usually used to lower blood cholesterol levels and reduce risk for illnesses related to atherosclerosis, with a varying degree of effect depending on underlying risk factors and history of cardiovascular disease. Clinical practice guidelines generally recommend people start with lifestyle modification through a cholesterol-lowering diet and physical exercise. For those unable to meet their lipid-lowering goals through such methods, statins can be helpful. The medication appears to work equally well regardless of gender. If there is an underlying history of cardiovascular disease, it has a significant impact on the effects of statin. This can be used to divide medication usage into broad categories of primary and secondary prevention. For the primary prevention of cardiovascular disease, the United States Preventive Services Task Force 2016 guidelines recommend statins for those who have at least one risk factor for coronary heart disease, are between 40 and 75 years old, and have at least a 10% 10-year risk of heart disease, as calculated by the 2013 ACC/AHA Pooled Cohort algorithm. Risk factors for coronary heart disease included abnormal lipid levels in the blood, diabetes mellitus, high blood pressure, and smoking. They recommended selective use of low-to-moderate doses statins in the same adults who have a calculated 10-year cardiovascular disease event risk of 7.5–10% or greater. In people over the age of 70, statins decrease the risk of cardiovascular disease but only in those with a history of heavy cholesterol blockage in their arteries. Most evidence suggests that statins are also effective in preventing heart disease in those with high cholesterol but no history of heart disease. A 2013 Cochrane review found a decrease in risk of death and other poor outcomes without any evidence of harm. For every 138 people treated for 5 years, one fewer dies; for every 49 treated, one fewer has an episode of heart disease. A 2011 review reached similar conclusions, and a 2012 review found benefits in both women and men. A 2010 review concluded that treatment without history of cardiovascular disease reduces cardiovascular events in men but not women, and provides no mortality benefit in either sex. Two other meta-analyses published that year, one of which used data obtained exclusively from women, found no mortality benefit in primary prevention. 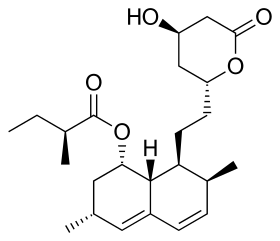