The Milky Way is the galaxy that contains the Solar System, with the name describing the galaxy's appearance from Earth: a hazy band of light seen in the night sky formed from stars that cannot be individually distinguished by the naked eye. The term Milky Way is a translation of the Latin via lactea, from the Greek γαλαξίας κύκλος (galaxías kýklos, 'milky circle'). From Earth, the Milky Way appears as a band because its disk-shaped structure is viewed from within. Galileo Galilei first resolved the band of light into individual stars with his telescope in 1610. Until the early 1920s, most astronomers thought that the Milky Way contained all the stars in the Universe. Following the 1920 Great Debate between the astronomers Harlow Shapley and Heber Curtis, observations by Edwin Hubble showed that the Milky Way is just one of many galaxies. The Milky Way is a barred spiral galaxy with a diameter between 150,000 and 200,000 light-years (ly). It is estimated to contain 100–400 billion stars and more than 100 billion planets. The Solar System is located at a radius of 26,490 (± 100) light-years from the Galactic Center, on the inner edge of the Orion Arm, one of the spiral-shaped concentrations of gas and dust. The stars in the innermost 10,000 light-years form a bulge and one or more bars that radiate from the bulge. The galactic center is an intense radio source known as Sagittarius A*, assumed to be a supermassive black hole of 4.100 (± 0.034) million solar masses. Stars and gases at a wide range of distances from the Galactic Center orbit at approximately 220 kilometers per second. The constant rotation speed contradicts the laws of Keplerian dynamics and suggests that much (about 90%) of the mass of the Milky Way is invisible to telescopes, neither emitting nor absorbing electromagnetic radiation. This conjectural mass has been termed 'dark matter'. The rotational period is about 240 million years at the radius of the Sun. The Milky Way as a whole is moving at a velocity of approximately 600 km per second with respect to extragalactic frames of reference. The oldest stars in the Milky Way are nearly as old as the Universe itself and thus probably formed shortly after the Dark Ages of the Big Bang. The Milky Way has several satellite galaxies and is part of the Local Group of galaxies, which form part of the Virgo Supercluster, which is itself a component of the Laniakea Supercluster. The Milky Way is visible from Earth as a hazy band of white light, some 30° wide, arching across the night sky. In night sky observing, although all the individual naked-eye stars in the entire sky are part of the Milky Way, the term 'Milky Way' is limited to this band of light. The light originates from the accumulation of unresolved stars and other material located in the direction of the galactic plane. Dark regions within the band, such as the Great Rift and the Coalsack, are areas where interstellar dust blocks light from distant stars. The area of sky that the Milky Way obscures is called the Zone of Avoidance. The Milky Way has a relatively low surface brightness. Its visibility can be greatly reduced by background light, such as light pollution or moonlight. The sky needs to be darker than about 20.2 magnitude per square arcsecond in order for the Milky Way to be visible. It should be visible if the limiting magnitude is approximately +5.1 or better and shows a great deal of detail at +6.1. This makes the Milky Way difficult to see from brightly lit urban or suburban areas, but very prominent when viewed from rural areas when the Moon is below the horizon. Maps of artificial night sky brightness show that more than one-third of Earth's population cannot see the Milky Way from their homes due to light pollution. As viewed from Earth, the visible region of the Milky Way's galactic plane occupies an area of the sky that includes 30 constellations. The Galactic Center lies in the direction of Sagittarius, where the Milky Way is brightest. From Sagittarius, the hazy band of white light appears to pass around to the galactic anticenter in Auriga. The band then continues the rest of the way around the sky, back to Sagittarius, dividing the sky into two roughly equal hemispheres. The galactic plane is inclined by about 60° to the ecliptic (the plane of Earth's orbit). Relative to the celestial equator, it passes as far north as the constellation of Cassiopeia and as far south as the constellation of Crux, indicating the high inclination of Earth's equatorial plane and the plane of the ecliptic, relative to the galactic plane. The north galactic pole is situated at right ascension 12h 49m, declination +27.4° (B1950) near β Comae Berenices, and the south galactic pole is near α Sculptoris. Because of this high inclination, depending on the time of night and year, the arch of the Milky Way may appear relatively low or relatively high in the sky. For observers from latitudes approximately 65° north to 65° south, the Milky Way passes directly overhead twice a day. 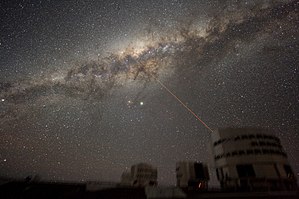